Fans enjoyed a spectacular final day on Sunday at Club de Campo Villa de Madrid with a fantastic result for Spanish golf and Spanish golf fans alike. Rafa Cabrera was victorious in a playoff (-19) and takes the crown from Jon Rahm to join the winners’ circle at the ACCIONA Open de España presented by Madrid.

He and Adri Arnaus provided us with a final round that will live on in memory for a long time. Despite both faltering on the first few holes, they were never far from the lead and it eventually became a matchplay situation that ended with victory for Cabrera thanks to a great birdie on the 18th in the first playoff hole.

With the win, the Canary Islander has completed his collection; he won the Campeonato de España at every age group as an amateur and this was the title he needed to finish the set, something even Jon Rahm cannot claim to have done, as he did not win the tournament at under-13 level.

Cabrera-Bello’s final round could barely have got off to a worse start, with a double bogey on the first that meant he immediately lost the lead he had worked so hard for over the first 54 holes, but it turned out to be the only blemish on his card. From there, he produced one sole birdie (hole 4) on the next 12 holes, time during which he missed several good chances, and then finally strung three together to reach -19 and get one hand on the title.

On the 18th, which he reached level with Arnaus, he saved par in spectacular fashion, which together with a missed birdie by the Catalonian, meant Spain’s tenth winner of its national open would be chosen in a playoff.

He had already alluded to what it meant to him to win this tournament having come so close in 2019, and today he has finally lifted a trophy emblazoned in the colours of the Canary Islands flag once again. It was an especially emotional moment for him to triumph on Spanish soil after such a tough season.

“This victory is really special, I came here in my worst spell of the last 10 years of my career, and I’m leaving with the cup. It’s true that I started badly, I would have liked to start with five birdies, but I’m proud that I kept my chin up and it paid off”, said Cabrera-Bello after sinking his final putt.

Adri Arnaus proved a more than worthy opponent. He was looking for his first win on the European Tour and he suffered from an untidy start, with two good par saves on the first two holes and a bogey on the 3rd. However, he quickly bounced back with a routine birdie on the par 5 4th.

His first big moment came with an eagle on hole 7, thanks to an astonishing tee shot and a very short shot into the green, which he made the most of by sinking the putt. Immediately afterwards, another good strike on 8 earned him another birdie and a two-shot lead over Cabrera. The fearsome 11th hole stole a shot from him which, together with Cabrera’s birdie meant they were level at the top of the leaderboard. Arnaus produced another miracle eagle on the 14th, while Cabrera birdied and would go on to do the same on 15 to maintain parity.

Nothing could separate them on the final holes, although on the 18th it looked very much like Arnaus would lift the trophy, he missed a 10 foot putt to win, taking it to a playoff.

In fact, the playoff looked like it would be a similar story, both missed the fairway to the left, but the Canary Islander’s pitch was the better of the two and a sweet putt allowed him to lift, for the first time in his life, the ACCIONA Open de España presented by Madrid cup.

The victory means Cabrera has ended a streak of six tournaments that he has led after round three and failed to win, but today he did so in front of his home fans after a perfect week.

ACCIONA is the new main sponsor of the Open de España 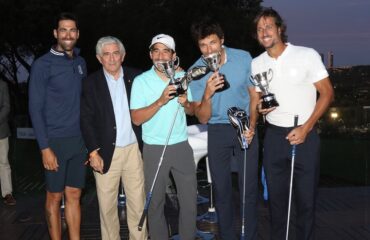 Feliciano, Marc López and Velencoso, ‘students’ of Quirós at the Open