The best of 2019: nobody could stop Jon Rahm

The 2019 edition marked the start of a new era, it was the beginning of a more professional, more global and more innovative Open de España with Club de Campo Villa de Madrid as its fixed venue.

The tournament very much lived up to its billing, not only because of the icing Jon Rahm put on the cake with his spectacular victory, but also because of the success of the week as a whole and the big names that packed the top of the leaderboard.

Spanish fans were delighted to see five of their countrymen in the top 10 when the tournament ended. Both Saturday and Sunday’s rounds were dominated by Spaniards, with one of the biggest stars, Sergio Garcia, climbing into the top ten in round four.

The surprise package of the week was Samuel del Val, who produced four days of impeccable golf and was only outplayed by Jon Rahm and Rafa Cabrera Bello. Although the Murcia native had already enjoyed a spell on the leaderboard in the 2018 Open de España, the 2019 event was something of a consolidation for him and if one thing is clear, it’s that he enjoys a great relationship with the city of Madrid.

He was joined on day three by Adri Arnaus and Rafa Cabrera Bello in the final group, where there was no room for hot favourite Jon Rahm, who made the most of the occasion to launch an attack from the penultimate group with a 63 that will go down in the annals of Spain’s national open.

With a five-shot lead and 18 holes left to play, it would take something extraordinary for the Basque player not to seal his double, but none of his rivals threw in the towel and Spanish fans were treated to a gala Sunday.

Victory, with a score of -22, improving on his -20 from 2018, went to Jon Rahm, followed by Canary Islander Rafa Cabrera-Bello on -17 and Del Val with -15. Adri Arnaus continued Spain’s dominance of the leaderboard by posting -13 to finish fourth alongside Danish players Hansen and Winther. Seventh position was occupied by a solid Sergio Garcia, who was back in Madrid after many years away and completed the impressive quintet of Spaniards in the top 10 of their country’s oldest tournament.

South Africans Harding and Lombard, Japanese player Kawamura and the Australian Scrivener closed out the final spots in the top ten at an event that, as mentioned above, marked the start of a new era for the tournament.

For the 2021 edition of the Acciona Open de España presented by Madrid, the Spanish Armada will be on hand once again to enthral its people. 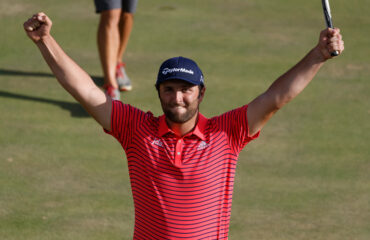 “The course conditions are like on the PGA Tour”

Luke Donald, an ex-world number one, will play the ACCIONA Open de España presented by Madrid